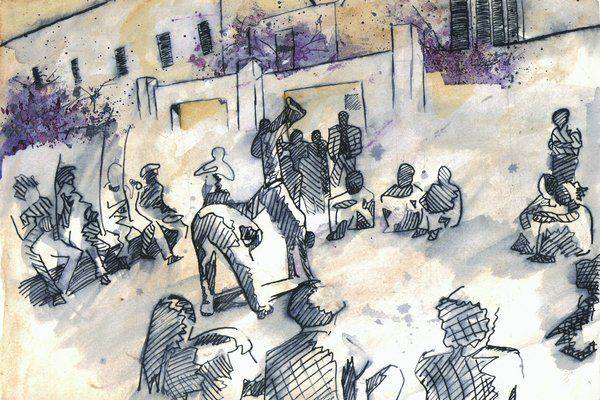 Now, to go into a little more detail…

Capoeira is an African martial art, which later became an Afro-Brazilian form, which has since progressed past being a Brazilian martial art form, and has become an International Art Form.

This art has many faces. It’s a game, a dance, a martial art, a form of philosophy, and a way of life.

Capoeira, as we know it in this day and age, is a communal game in which two opponents play each other inside a circle, formed by the other players who create rhythm for the game by clapping, singing and playing traditional instruments. The two “capoeiristas” play a game together using capoeira movements, camouflaging self-defense kicks with playful acrobatics and dance-like moves, spontaneously creating a strategy to fool the other player and perhaps catch them off guard. At the same time, the two players work together to build a beautiful, harmonic and naturally-flowing game.

And as this art has spread around the world to become a significant part of  mainstream popular culture, and is being seen more in entertainment, movies, and sports,  more and more websites (like this one), pop up to tell people more about it. Capoeira is  practiced worldwide by thousands of people.  There are many sites out there about Capoeira from practitioners of the art, in many languages. However, most of them are about the more modern forms of Capoeira, known as Capoeira Regional and Capoeira Contemporeanea (CONTEMPORARY CAPOEIRA).

But on this website we will mostly explore the style of Capoeira that I’m learning, the old, traditional form, which goes much deeper than just music and kicks (I’m not trying to say that the modern forms don’t, but I don’t practice those forms and I don’t know much about them).

This form is called Capoeira Angola. It is a deceptive game of entrapment that relies on cunning and guile. Its movements tend to be very close to the ground and rely on strong balance and positioning.

Capoeira Angola has its roots in Bantu tradition and was used by the enslaved Africans of Brazil as a form of revolution. In keeping with African war strategies, Capoeiristas
masked the art’s effectiveness from plantation overseers.

Being an Angoleiro is more than just playing some antiquated style of Capoeira. We, who call ourselves Angoleiros, want to keep the traditions of Capoeira Angola alive, and vibrant.

However,  due to Angoleiros being relatively rare (Here in L.A. anyway), and not to mention being a bit secretive about what we do, there’s not that much good information about Capoeira Angola on the web, and I want to see what I can do, about that.

This website was created to be a resource of information on the art of Capoeira Angola.

Now mind you, this website is NOT supposed to be an end-all be-all for information about Capoeira Angola. What I post here is MY OWN OPINION.

And let me tell you, the more I learn about this art, the more I realize that I have alot more to learn.

This web site is an ongoing project, which means as time goes by, this site will change, just as Capoeira changes with time.

Things will be added, and things will be discarded. However, this website, first, last, and middle, will always be about the tradition of capoeira Angola.